Tee off in Eurobodalla

Home to some of the most picturesque and challenging golf courses in Australia, the NSW South Coast is the ultimate location for a golfing holiday. The Eurobodalla region alone has half a dozen courses to choose from, each with their own unique draws – including arguably the most iconic par 3 in the country, which you’ll find at Narooma Golf Club. For golfers looking to play a full 18 holes, Club Catalina, Moruya Golf Club and Narooma Golf Club all offer a fantastic day out on the green. 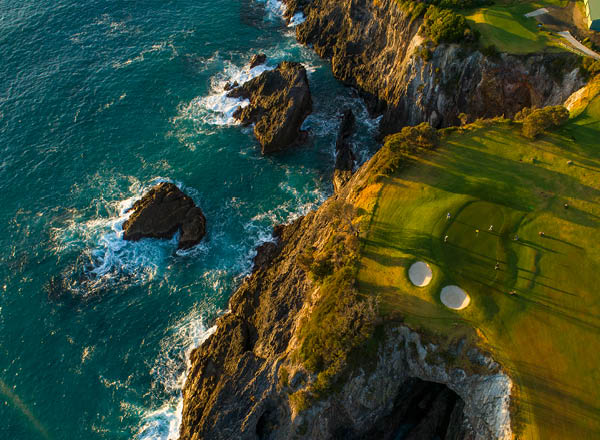 When Paul Hogan filmed a Winfield commercial on the third hole in the mid-1970s, the Aussie comedian didn’t just leave behind a name for the now-famous par 3 requiring players to hit over the ocean to a clifftop green, but also helped to immortalise Narooma Golf Club as one of the nation’s must-play courses.

Boasting panoramic ocean views from the opening six holes, the par 72 course then meanders around a coastal lagoon, making the entire course incredibly scenic. Look out for the mysterious graves on the fifth hole marked by three white crosses, rumoured to belong to aviation pioneers who crashed on the site when flying from nearby Montague Island.

With the South Coast’s rugged coastline visible to the north, Montague Island to the east and Glasshouse Rocks to the south, the clubhouse offers fantastic views. With four bars, a whale-watching platform complete with binoculars, Paul’s on the Course Brassiere, (with fresh Narooma seafood, including local oysters, a star feature of the menu), you’ll be spoiled for choice at Narooma Golf Club.

Club Catalina in Batemans Bay – which celebrated its centenary in 2020 – has its own unique attraction in the form of an abundance of kangaroos that can often be seen grazing alongside the fairways of this par 72 championship course.

Free from steep climbs and back-breaking bunker shots, Club Catalina’s mostly flat, attractively landscaped fairways make for a relaxing golf day. Known as The Red, The White and The Blue, the three nine-holers can be played in any combination, making this well-kept course a great option for players keen to tackle several rounds. Anchored by the buzzing Catalina Restaurant, which also offers takeaway wood-fired pizzas, the recently refurbished clubhouse offers all the amenities a golfer could want for, from a well-stocked pro shop to big screens streaming the match of the day.

Tucked behind Moruya’s charming town centre, just off the Princes Highway, Moruya Golf Club is a fine option for players who love to tee off in a countryside setting. Similarly to Club Catalina, the par 71 course is relatively flat, with beautifully manicured greens including the vast double green shared by holes 9 and 18, and a prevailing north-easterly breeze providing relief on hot summer days. With some heavily bunkered greens, tight doglegs and water in play for half the course, the layout will keep most players on their toes. Be sure to check the course information page on the club’s website before you tee off, which lists handy tips for approaching each hole.

Looking out over the course, the large, modern clubhouse features the Double Green restaurant, a pro shop where you can also grab refreshments to go, and the Fairway Bar, which hosts the best happy hour in town on Fridays and Saturdays, with tap beer from $4 and wine. Visit the Moruya Golf Club website for the full schedule of popular weekly events.

For more information freecall 1800 802 528 or email info@eurobodalla.com.au
STAY UP TO DATE With our Newsletter
Stay up to date. to our newsletter